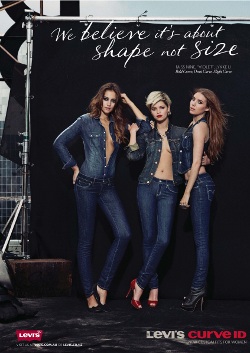 The Winter 2011 collection boldly moves the Levi’s Curve ID range into the next generation of perfectly fitting denim. The original collection was your basic jeans and this winter Levi’s Curve ID strides purposefully into the territory of on-trend jeans with a variety of new washes which include dusky greys, slightly distressed denim and the fashion that never goes out of fashion – khaki.

Included in the Levi’s Curve ID Winter collection is a skinny, straight leg and skinny boot cut jean and also a slim and boot cut style. All of these cuts are available in the three Levi’s Curve ID’s – Slight, Demi and Bold.

The face of the Levi’s Curve ID campaign in Australia has just been named in Amanda Ware, Australia’s Next Top Model winner. The contract forms part of her winners’ prize.

This innovative jeans system has been spotted hugging the curves of international celebrities such as Janet Jackson, Angelina Jolie and Ellen Degeneres and if the Levi’s Curve ID range can attract celebrities of that calibre they are sure to receive a dedicated following!

The Levi’s Curve ID system matches the majority of women to their perfect pair of jeans through the three universal body types:

Slight Curve – designed to define the waist of a woman and celebrate straight figures.

Demi Curve – created to smooth a woman’s shape and flatter her waist, these were designed for the woman with even proportions.

Bold Curve – shaped to honour the woman with genuine curves while they hug her waist without gaping or pulling.

For more information about this exciting new denim direction please head over and check them out on the web: www.levis.com.au

My blurb went missing… so now I have to bring you a new one. One that is a little broader too.
I devour books, vampires and supernatural creatures are my genre of choice but over the past couple of years I have broadened my horizons considerably.
I inhale music, hair metal that satisfies my inner bogan is where my musical passion lies, but again I’ve been exposed to lots of different music I wouldn’t normally listen to and have broadened those horizons also.

In a nutshell – I love to write! I love interacting with a diverse range of artists to bring you interviews.
Perhaps we were perfect before – I LOVE WORDS! Reading, writing, speaking, listening – if it’s got words I’m there!

Can’t Find What You are Looking For?

Custom Search
Or you can't decide? Browse all Our Fashion Topics